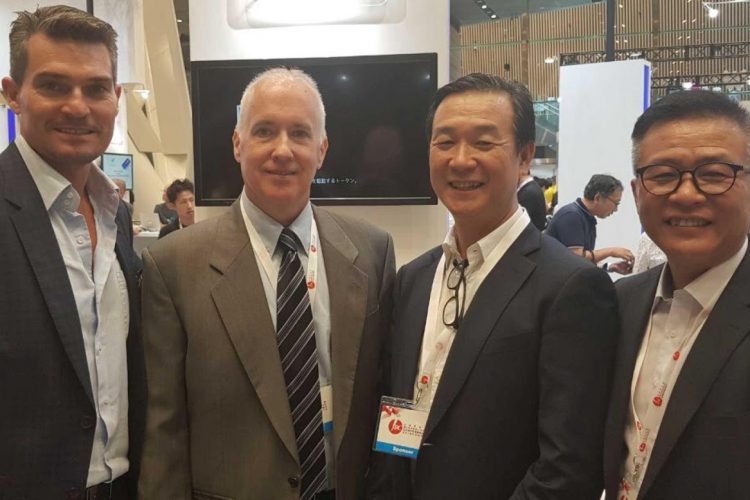 With Mozo’s crowdsale beginning on July 11th, 2018, the roadshow is in full swing.

Project Mozo’s CEO, Giang Phung, presented at the Japan Blockchain Conference, held last week on 26–27 June, 2018. There was no shortage of interest in Mozo’s capabilities and potential.

8:30am The first day started with a long-queue of Japanese crypto investors and enthusiasts arriving at the show.

The Mozo booth is on the right of this picture. 10:00am The Mozo team in action at our booth. The video clip plays on loop, and team members answer customer queries.

11:10 Our sponsor, Israeli crypto billionaire Moshe Hogeg, came to the Mozo booth to lend his support.

12:00pm The Mozo team skipped lunch as the lunch crowd made it difficult to get what you want in time to return to the booth.

2:00pm We finally had lunch. There were food trucks!

3:00pm Due to the crowds, the airconditioner was not enough to keep us cool, jackets were off. Nice pose Mr CMO, Danny Do.

5:00pm 1 hour out from closing the booth. Stocktake: we ran out of 1-pagers in Japanese language.

6:00pm Doors closed. Attended the afterparty (Diana Club, but nothing to do with the British Princess) for a networking session. 10:00 The show attracted all nationalities, as evidenced by this photo

15:30 Mozo CEO, Giang Phung, presents in Hall B. Definitely the highlight of the show for us!

Throughout the two day conference attended by more than 5,000 people (our estimate), the booth was frequented by potential investors, and inundated with questions.

Mozo is NOT a concept, our technologies are proven

Q1. What is the meaning of MozoX? I wonder if there is any meaning to…